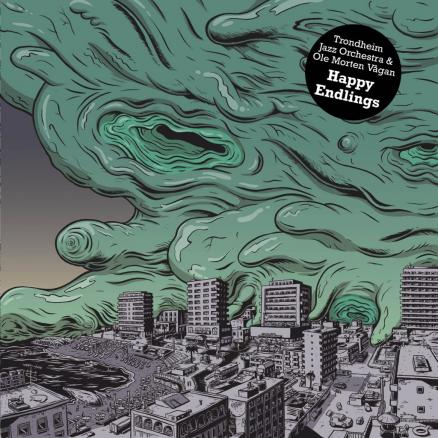 Happy Endlings is TJO’s twentieth album. Artistic director of the project is Ole Morten Vågan, who composed the material, plays bass on the album and who co-produced it with Midtnorsk Jazzsenter. Vågan’s connection with TJO is longstanding – he played on the albums We Are (2005), Wood And Water (2008) and What If? (2009). He is best known for his genre-bending, Frank Zappa-informed quintet, Motif. Happy Endlings is, in a way, Motif’s modernistic but tradition-savvy music dialled up on a bigger canvas – a canvas that resonates with the vast, apocalyptic images of the nineteenth century English Romantic painter John Martin, particularly works such as The Last Man, Sadak in Search of the Waters of Oblivion and The Destruction of the Pharoah’s Host.